Skateboarding & BMX on the Sunshine Coast

Skateboarding & BMX on the Sunshine Coast

The Sunshine Coast is famous for its beaches and cultural pursuits, but it’s also a paradise for skateboarders and BMXers. The region has 4 BMX dirt parks and over 30 skateboard and BMX facilities which also cater for roller bladers.

If you love skateboarding and know the difference between a ‘grinding block’ and a ‘fun box’, this is for you! Below are just some of the facilities where you can hone your skills on the Sunshine Coast.

One of the biggest and most popular places is Alexandra Heads Skatepark, also known as Alex Skatepark. It opened in 2017 and is located on the waterfront right next to Buhk Park and the Alex Heads Surf Lifesaving club. What a great combination; when you’ve finished skating you can go surfing!

The large bowl in the centre is flanked by long sections of quarters and lots of ledges to test your skills. There is also one main double-angled slope rail which allows for approaches on either direction.

Alex Skatepark caters for skaters, BMX riders and bladers of all skill levels. There are public amenities just south of the Alex Surf Club. But please note there is no shade here. 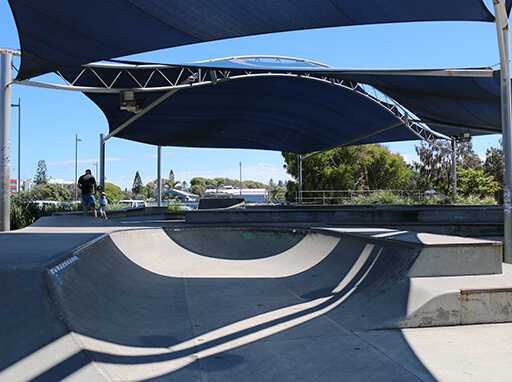 If you do want shade, then head further north to the skate park at Coolum Beach. Its bowl is large and deep. It has two sections which are in a loose U-shape with a spine and transfer in the middle.

If you want a challenge you can try the vert extension on one of the flat faces. It also features a grind block, slide rail, vertical wall drops, manual pod and pump feature.

If you head inland, to the south of the Sunshine Coast is Beerwah. Right next to the Beerwah Aquatic Centre is the Beerwah Skatepark. Nearly all of the facility is covered by shade sails so you are protected from the sun.

This skatepark includes coping, spine and ground rails. It also has ledges, a declining bank and a flat bank, three ¼ pipes, two grinding blocks and a fun box.

A great feature of this skatepark is the space. 5ft big banks and quarters feed fun boxes and hips. It also has 7ft half pipe with 3 entries. This skatepark gives you the space to enjoy long drawn out grinds.

The skatepark at Caloundra is located within the Caloundra Aquatic Lifestyle Centre. It is fully fenced and supervised by the Centre staff. Over half of the facility is shaded.

The skatepark at Nambour caters for all ages and skills from beginner to intermediate. This is an award winning skate park and is one of the best on the Sunshine Coast. It’s definitely worth checking out.

The Sunshine Beach New Skatepark at Noosa has been upgraded and revamped and caters for all ages and levels of experience. The public were invited to provide their thoughts on what they wanted, and many of their ideas are incorporated. One of the key concerns was a smooth finish surface. And that’s what they got!

The skatepark was reopened in 2017 and features an inground skate bowl, a vert ramp, a mini-half pipe, flat bank and jersey block, rollover with A-frame hubba, love seat quarter pipe, and A-frame and flat steel rails.

There are numerous other skateparks around the sunshine coast; Peregian Beach, Mudjimba, Dicky Beach, Palmwoods, Mooloolah Valley, Yandina and Eudlo, just to name a few. There are plenty of places to do grinds, flips and other tricks.

So if you’re into skateboarding, BMXing or rollerblading, you are definitely spoiled for choice in the Sunshine Coast!

Stay in the Loop!

Stay in the loop, and we will let you know of any Accommodation Specials or Events!